Nollywood star Uche Ogbodo has made a jaw-dropping revelation after being called a hypocrite for supporting her colleague, Yul Edochie’s first wife, May, and also his second wife, Judy Austin.

May Edochie recently took to Instagram to address the issue of polygamy and claims of living under the same roof as her husband which triggered speculations of unrest in their marriage.

Social media users dragged the Actress and tagged her ‘Hypocrite’.


Reacting, Uche countered the claim, stated that she’s a “true one-man soldier who stands on truth regardless of anyone’s pain or displeasure.”

The 36-year-old claimed that the “chameleons” in this case are those Nollywood stakeholders who knew that Yul Edochie has been dating Judy Austin for the past six years and never told May about it.

Uche also alleged that her colleagues are now taking sides and insisted she won’t inherit enemies.

The actress added that she won’t judge anyone and would continue to be friends with all the parties involved till they find a “peaceful ground”.

“On A second Tot I recon I had to come back to this. First Off I’m not A Hypocrite but a True One man Soldier who stands on truth regardless of any ones pain or displeasure!

Y’all true Chameleons are all those nollywood People who knew that this relationship has been ongoing for the past 6 years but never mentioned it to May till it was too Late now they are Taking sides.

“Me ! I am true to myself and will remain So! In as much as I Sympathize with May on her pain , I will not inherit Enemies.


“Everyone is created by God is Human and I have no power to Judge anyone. I will continue to be Friends with all the parties involved till they find a peaceful Ground. Fu**k y’all Haters! God bless the Edochies . #peace #” 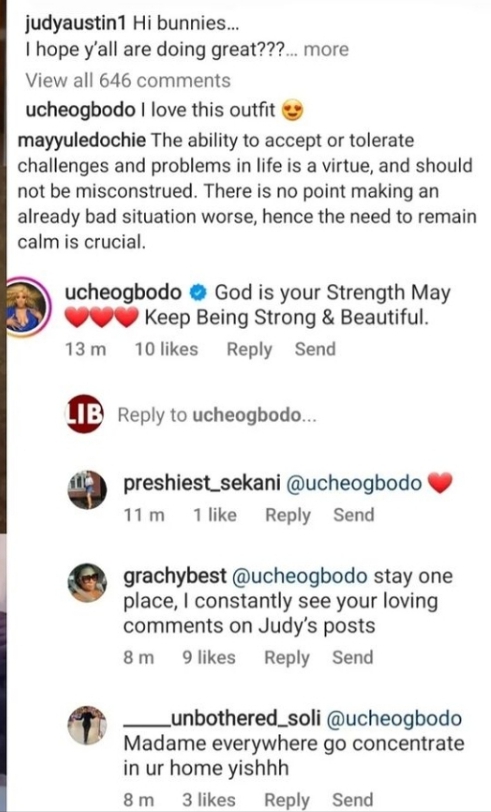 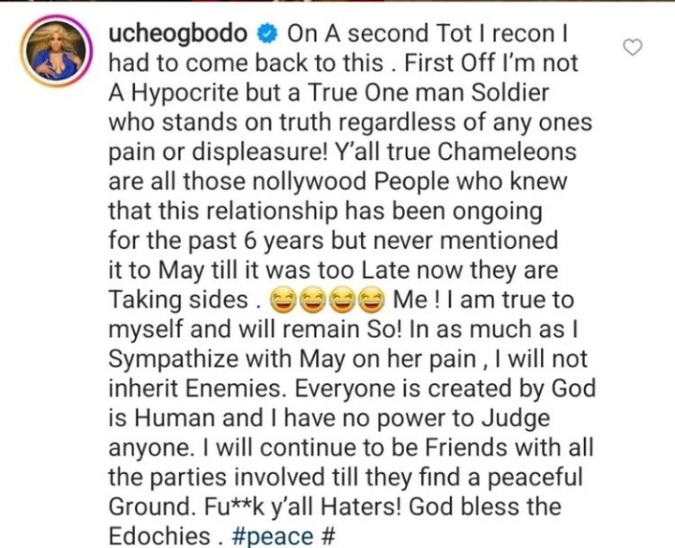