Marlian Records Boss, Naira Marley, was recently seen in a viral video speaking to label signee, Mohbad’s father and reporting some of his son’s misdemeanours to him.

WITHIN NIGERIA earlier reported that Mohbad cried out on Twitter on Wednesday where he posted videos and photos of his injured self.

Speaking on the attack, Mohbad claimed was assaulted by Naira Marley and his associates after he demanded a change of manager.

Reacting to the allegation on Twitter, Naira Marley claimed Mohbad acted under the influence of alcohol, adding that the 26-year-old has a history of getting intoxicated.


In a new video that surfaced online, the Marlian boss was heard reporting his record label signee to his father.

The Rapper told the Singer’s dad that he has spoken to Mohbad several times about his addiction to hemp and some of the misdemeanours that his addiction might influence.

Naira Marley also said in the video that Mohbad sometimes forgets his phone passwords, account details and even song lyrics.

The Label boss gave an instance that there was one-time Mohbad was performing on stage, and he forgot his lyrics completely. 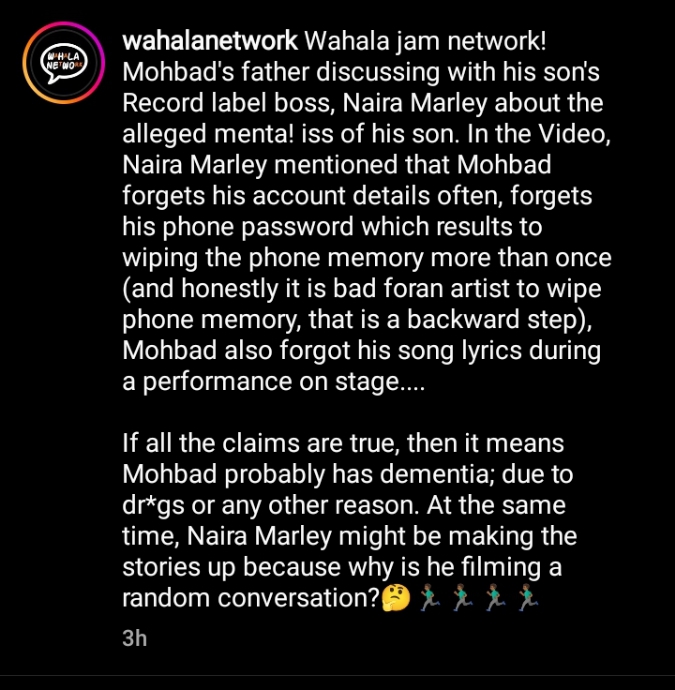